Flight of The Conchords Tickets

Music and comedy could be an explosive combination in the hands of FLIGHT OF THE CONCHORDS. Fans and audiences are rockin’ their hearts out and rollin’ on the floor with laughter with their quirky brand of music, and folk parody. These oddballs are stepping out of the boob tube and are now treading the live concert trail. And just like modern day pied pipers, legions fans are on the hot pursuit for tickets. Your curiosity is egging you on to do the same, right? Give-in, no use resisting the opportunity for a good belly-laugh. Buy your tickets now! 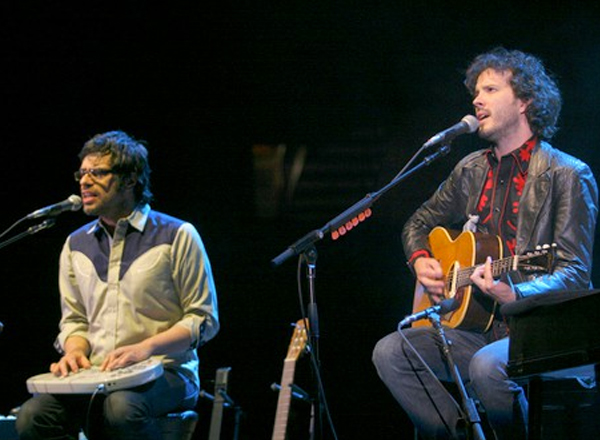 Formed in 1998, Bret McKenzie and Jemaine Clement first performed live as part of a five-man group. But the band eventually evolved into a twosome, and they’ve been performing live in stand-up comedy stages and television shows. Their deadpan wit, quirky lyrics, and hilarious stage presence, and not to mention the cult following they were attracting, led to groundbreaking shows at the BBC radio series and then an American television series that aired for two seasons on HBO.

Now soaring high and trotting the globe with their guitar-based musical comedy. They used to describe themselves as "New Zealand's fourth most popular guitar-based digi-bongo acapella-rap-funk-comedy folk duo”. Now, they refer to themselves as "the almost award-winning fourth-most-popular folk duo in New Zealand.” Critics and reviewers also got a belly-full of laughs from their style of folk meets parody. They bagged several awards including Best Alternative Comedy Act at the 2005 US Comedy Arts Festival and Best Newcomer at the Melbourne Comedy Festival, and also clinched a Grammy for Best Comedy Album at 50th Annual Grammy Awards.